Skip to content
Home Events A walk through the Brno Central Cemetery: the graves of prominent German figures

A walk through the Brno Central Cemetery: the graves of prominent German figures

Brno’s Central Cemetery (Zentralfriedhof) was established in the 1880s, when it replaced an earlier City Cemetery that was close to today’s Kounicova Street. It was designed by Alois Prastorfer, a graduate of Vienna’s Academy of Fine Arts. Prastorfer’s project reflected Brno’s economic position as one of the Austrian monarchy’s most prominent industrial cities, and was intended to feature high-quality architecture and the tombs of the city’s eminent families. Unfortunately, the development and the character of the cemetery were radically affected by both world wars. After 1945, attempts to deal with the German traces in the city included the Central Cemetery and some tombstones of German families were removed. Despite that, monuments to prominent figures, including Ernst Johann Herring, Adolf Löw, Karel Wawra and Adolf Ripka von Rechthofen were preserved. A commented tour will lead us through the cemetery’s oldest section and acquaint us with both its development and the stories of the people who once co-created the city of Brno. 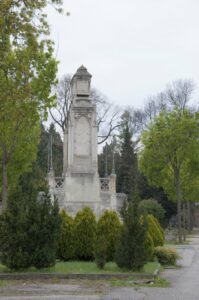 Limited capacity. We suggest booking your place below on this site.