Light to the people Peace in the world – exhibition

These words adorn the place in Fredericksburg, Virginia where a native of Brno, Hugo Iltis (1882–1952) lies buried. They are not just profound words composed to express a strong credo; they provide the intellectual backdrop to Iltis’s tireless efforts and actions.

The exhibition in the garden of the Augustinian Abbey in Staré Brno will commemorate the life-story of this botanist, geneticist and gifted teacher, who made an essential contribution to the rediscovery of the life and work of Johann Gregor Mendel. Iltis also left a significant trace in the Moravian metropolis by establishing evening classes for adults at the Masaryk People’s School (Masaryk Volkshochschule). His wife Anni was a significant source of support and a collaborator. A German speaker himself, Iltis actively supported German culture in the new Czechoslovak state, yet, being of Jewish origin, he did not hesitate to oppose from a scientific perspective the growing popularity of German National Socialism. In numerous lectures, publications and radio programmes, he debunked the Nazis’ fallacious racist ideology. After the Munich Agreement, he therefore had to seek refuge for himself and his family abroad. They found a new home in the USA, the country in which his grandson, David, is now making preparations to visit this year’s festival.

In collaboration with Mehrin and the Cultural facilities of the town of Boskovice.

Programme will be held in czech only.
Limited capacity. We suggest booking your place below on this site. 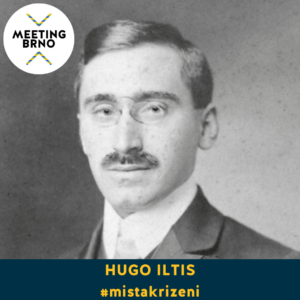