An Apple Tree Floats in the Air – Unveiling of the artwork

Art intervention into the monument to Marie Kudeříková 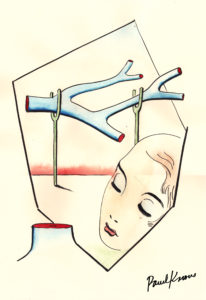 The sculptor Pavel Karous creates for this year’s Meeting Brno festival a piece of installation art that updates the present monument to Marie Kudeříková, created in the 1970s by Josef Preclík and Miloš Axman. The unveiling, with the sculptor’s participation, will take place on Wednesday 28/7 at 18:00. That same day you can go with Pavel Karous on a walking tour of plastic arts in Brno’s public spaces, which starts at 15:00 at Malinovského náměstí in front of the House of Arts.

Pavel Karous (born 1979) is a sculptor who creates objects and dedicates himself to site-specific installations and interventions into the public space. In his oeuvre he primarily pursues the relationship between geometry and human society. His long-term project Aliens and Herons documents and popularises the plastic arts of the real-socialism era. For his book Vetřelci a volavky (Aliens and Herons), created as part of this project, he was awarded the Most Beautiful Book of 2013 prize. In 2016, he executed for the museum in Boskovice the Monument to Bruno Zwicker, inspired by the life and works of the major Brno sociologist, who was a Holocaust victim. In collaboration with a refugee centre in Oslo, Pavel and his art group New Eternity created an installation, Fascism and Figuration, at the Lørenskog culture centre. Presently he is the head of sculpture at Scholastika, a contemporary art school, and hosts his own show about art in public space, Vetřelci a plameňáci (Aliens and Flamingos).

Marie Kudeříková was born on 24 March 1921 into a farming family in Vnorovy near Hodonín, the eldest daughter of Josef Kudeřík, who served in the Czechoslovak Legion during the war, and Františka Kudeříková. In the 1930s, the family moved to Vrbovce on the Moravian-Slovak border. Marie went to school in Velká nad Veličkou and then graduated from a grammar school in Strážnice. During her studies there, she became acquainted with the ideas of Communism and adopted them. After graduation, she moved to Veverská Bítýška, where she studied at a language school and was involved in anti-Nazi resistance, participating in the printing and distribution of illegal leaflets, smuggling resistance members and organising sabotage missions. In late 1941, she was arrested by the Gestapo – at that time she lived in Brno, Kamenná 21. During long and harsh interrogations, Kudeříková was virtually silent and did not betray anyone. The interrogation records say “hartnäckiges Schweigen”, that is, “stubborn silence”. In November 1942, she was sentenced to death by decapitation in Wrocław. The sentence was carried out on 26 March 1943, two days after Marie’s 22nd birthday.

During the Communist regime, the story of Marie Kudeříková’s life became part of political propaganda, while after 1989 it was doomed to oblivion. The Communist hero did not fit the post-Velvet Revolution times. And yet her legacy can be inspiring today. In the year of Marie Kudeříková’s 100th birthday, the Meeting Brno festival commemorates this brave woman with three events: the art intervention by the sculptor Pavel Karous, a discussion forum with Magda Vášáryová and the show by the director and choreographer Martin Dvořák, with which we will close this year’s festival.

The art installation will be on site until the beginning of September 2021.