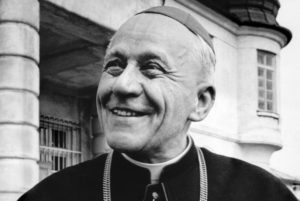 A persistent Christian, the archbishop of Prague, Cardinal Josef Beran (1888–1969) was a victim of the Nazi and Communist regimes. He was forced to spend the last years of his life in exile in Rome, far away from his home in Bohemia.

While the Czechs venerate the cardinal, in Germany he is often viewed critically and his allegedly negative position towards Germans is noted.

A new book by the Ackermann-Gemeinde organisation and the Institute for the Study of Totalitarian Regimes (published in 2021) sheds light on the causes of these different narratives, and the role that was played in this matter by the Communist secret service. These new findings will be introduced as part of the book launch, which will be followed by a discussion.

Guests:
Stanislava Vodičková – editor, Institute for the Study of Totalitarian Regimes
Manfred Heerdegen – historian, member of the board of Ackermann-Gemeinde
Stanislav Přibyl – general secretary of the Czech Bishops’ Conference

In collaboration with Ackermann-Gemeinde and financially supported by the Czech-German Future Fund. The talk will be simultaneously interpreted into Czech and German.

Programme will be held in czech and german.
Free entry. Limited capacity. We suggest booking your place below on this site.