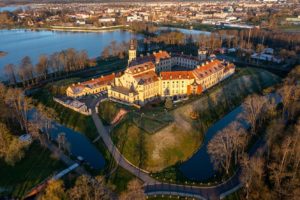 Draniki, vareniki and beer – do these go together at all? What are the things that connect us, and what are the distinctive aspects of the cultures of Belarus and Ukraine? A meeting in the garden of the Augustinian Abbey will offer an opportunity to learn more about these two countries than can be gleaned from the cursory reports in the media.

– Refreshments offering traditional Ukrainian and Belarussian dishes
– Screenings of topical documentary films
– Slide shows
– Workshops for children and adults
– 17:00 A conversation between the historian Radomyr Mokryk and Ukraine scholar Lenka Víchová
– 18:00 A discussion forum about the Banderites
– 19:30 A discussion forum of the Embassy of Independent Belarussian Culture

Included in the programme is a musical performance by Aliaksandr Yasinski, an accordionist and composer who experiments with various styles and genres. He was born in Baranavichy, Belarus, and has been living in Prague since 2011.

A conversation with the Ukraine scholar Lenka Víchová
Lenka Víchová’s scholarly focus is on the contemporary history of Ukraine and she edits The Ukrainian Journal. She will be interviewed by Radomyr Mokryk, a historian at the Institute of Slavonic and East European Studies, Faculty of Arts, Charles University.

Banderites
The complicated story of the so-called Banderites is one of the most controversial in Ukrainian history. Its connections with events of World War II continue to be topical in debates by historians and politicians, provide a source of tension in Ukrainian-Polish relations and often appear in the Czech media. The legacy of the nationalist movement in interwar Ukraine continues to be debated passionately in Ukraine itself. Czechs and Slovaks became particularly aware of the Banderite movement in the late 1940s and early 1950s, when it was interpreted by the Communist regime for its own propaganda purposes. Plenty of the myths surrounding the Banderites still survive today. Why did the movement emerge in western Ukraine precisely at the point it did? Were they Nazi collaborationists? Or was it a Ukrainian liberation movement? And who was Stepan Bandera, whose name is used to describe the members of the Ukrainian Insurgent Army? How have the narratives of this movement influenced Ukrainian politics and international relations? Answers to these questions will be sought in a debate between the historian Radomyr Mokryk, of the Institute of Slavonic and East European Studies, Faculty of Arts, Charles University, and Tomáš Řepa, a historian at the University of Defence Brno and author of the book Banderovci.

Discussion forum of the Embassy of Independent Belarussian Culture
In autumn last year, the Embassy of Independent Belarussian Culture was established in Brno, aiming to support cultural exchange and increase awareness of Belarus. The ambassador is the translator, Sjarhej Smatryčenka, who grew up in Minsk and for the past ten years has been living in Brno. For the discussion forum at the Meeting Brno festival, he has invited three guests of various professions:

Siarhei Šupa – a polyglot, renowned translator and journalist at Radio Free Europe, Siarhei was an activist in the Belarusian revival movement at the close of the Soviet era, and was among those who re-established the celebrated Belarusian newspaper, Nasha Niva. He has edited materials from the archives of the Belarusian People’s Republic, whose government in exile was in Prague after 1918.

Olga Žernosek – a medical doctor, graduate of Grodno State Medical University, Olga has been working in the Czech Republic since 2013 and is the co-founder of an association of doctors educated abroad, Doctor Chekhov, which works towards the recognition of foreign degrees of both medical and paramedical staff. The association was involved in implementing MEDEVAC, a Czech healthcare and humanitarian programme.

Natallia Makovik – in the late 1990s, Natallia was a student activist in Belarus, for which she was expelled from the university in Minsk. She was able to study in the Czech Republic thanks to a Czech aid programme. Over the years she has developed her career as a specialist on the commercial use of castles and chateaus, recognised in the Czech Republic and Europe-wide.

Programme will be held in czech, ukrainian, belarusian.
We suggest booking your place below on this site.