Skip to content
Home Events Hilsner and the Others – 9:30 pm 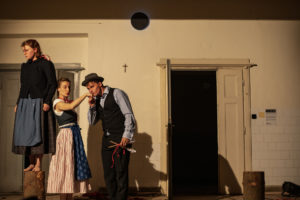 Anežka Hrůzová, aged 19, murdered in 1898 just before Easter in a forest near Polná, and Marie Klímová, aged 23, found in the same place only four months after her death – these are two victims for whose murders the Jew Leopold Hilsner was sentenced. The witnesses at the trial were interfered with; Hilsner was sentenced without evidence. Regarding this late 19th-century trial, also known as the “Hilsneriad”, we open a perspective of Anežka and Marie – the victims who are constantly talked about, but who themselves could never talk about their unexplained deaths.

This Czech-German production was created by Divadlo Feste in coproduction with the Meeting Brno and Divadelní svět festivals, and was premiered on 25 May 2021 at the latter.

“Feste has been able to approach the Hilsneriad from a hitherto-unexplored perspective: though the course of the investigation and the trial were determined exclusively by men, in Hilsner and the Others the murdered women play the main roles.”

“It is precisely the human tendency to succumb to prejudice, xenophobia and conspiracy theories and to allow these to cloud our judgment that is the central theme of this play, and so is the exploitation of the victims’ memory for political machinations.”
Petra Zachatá, Divadelní noviny

Lina Nausedat
The German actor Lina Nausedat accepted an invitation from the Meeting Brno festival to spend a creative residency in Brno, during which she was involved in the new play by Divadlo Feste, Hilsner and the Others. Lina was born and grew up in Berlin and in 2019 graduated in acting from the Berliner Schule für Schauspiel.