“The joint festive performance of the German and Czech opera troupes at the City Theatre might have appeared to our guests as an impressive artistic achievement – but for us who, like Mendel, are at home in this city, it has meant more than that. What in our country, where nationalistic madness turned two capable nations into sworn enemies, could until then seem a pure impossibility, […] has become real and thereby also the greatest enrichment that the Mendel celebrations could have brought to Mendel’s home.” These remarks were made by the Brno biologist Hugo Iltis about a Czech-German musical performance held in 1922 as part of the celebrations of the 100th anniversary of the birth of Gregor Johann Mendel. Hugo Iltis (1882, Brno – 1952, Fredericksburg, Virginia) was the main organiser of these celebrations as well as the initiator of the mentioned collaboration between Czech and German theatre companies. But above all, he wrote the first internationally recognised monograph about Mendel and created a valuable Mendelian collection in Brno, which continues to be largely preserved in the city’s museums. 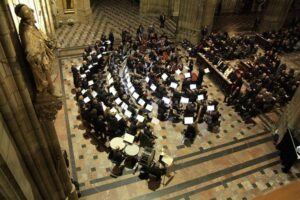 Now, a century on from these celebrations, the Meeting Brno Festival brings to Brno the Czech Academy of Sciences Chamber Orchestra to honour the memory of G. J. Mendel and Hugo Iltis. The chamber orchestra is a non-professional ensemble made up of active musicians from various parts of the world who are also scientists in many disciplines, and are brought together by their love for the arts and sciences.

The concert programme is not a recreation of the one held in 1922. It is a dialogue of Czech and German music by J.S. Bach, Antonín Dvořák and the Brno-linked composers Bohuslav Martinů and his pupil Vítězslava Kaprálová, the first female composer to achieve world renown.

In addition to the concert by the Czech Academy of Sciences Chamber Orchestra, our festival is preparing a unique exhibition, Hugo Iltis for Mendel, a world premiere of a production inspired by Iltis’s life, and the installation of a Stolperstein – a stone commemorating the disappeared – for Hugo Iltis and his family.

In collaboration with the Orchestra of the Czech Academy of Sciences.

Free entry. Limited capacity. We suggest booking your place below on this site.