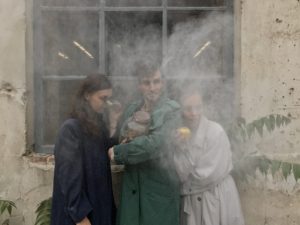 Usually, you learn the following about Kurt Gödel: Albert Einstein enjoyed his walks with him after work; he was born in Brno; he was the greatest logician since Aristotle; and fearing poisoning, he refused food and starved to death. And also that he had an unshakeable belief in a second life after life and that the world was essentially logical and good.

But if the world is essentially logical and good, who then poisoned the strudel? And, actually, did someone poison it? Who are these three weirdos lecturing about mathematics? And why should Kurt Gödel write stand-up comedy about mothers?

Fear nothing. All will be clear.
Have a piece of strudel.
Nobody poisoned it.

Financially supported by the City of Brno and the Ministry of Culture; in collaboration with the Austrian Cultural Forum in Prague.