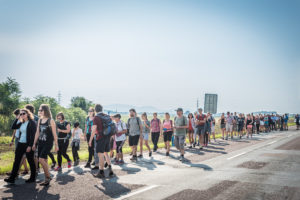 For the 15th time we will follow in the footsteps of more than 20,000 German-speaking Brno people who were driven towards the border with Austria 76 years ago. While able-bodied men had to stay in the city to endure forced labour, women, children and old men were ordered to march. At least 1,700 of them perished along the way and in the following days and weeks.

Since 2015 we have been walking, symbolically, in the opposite direction to the historical march, that is, from the mass grave in Pohořelice back to the garden of the Augustinian Abbey in Staré Brno. Six years ago, Brno’s councillors adopted a Declaration of reconciliation and a shared future, which became a milestone for Czech society in coming to terms with this chapter of its history.

This year’s march will be a remarkable experience and an opportunity for inspirational encounters. Witnesses and public figures from the Czech Republic, Austria and Germany will take part in the event, and societies involved in relations with our German-speaking neighbours will present their activities at their stands and provide an accompanying programme.

We dedicate this year’s March to supporting Belarusian civil society. At the end of the Reconciliation March in the garden of the Abbey there will be an appearance by Tomáš Petříček, the Czech foreign affairs minister in 2018–2021, alongside representatives of the Belarusian community.

We thank the Czech-German Future Fund for financially supporting this event.