Discussions at the Memory of Nations Institute Brno: Reconciliation March

Live-streamed debate with screenings, open to the public 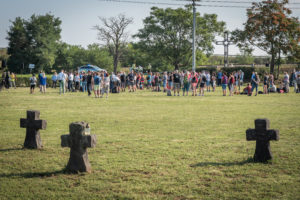 A series of debates organised by the Memory of Nations Institute Brno foreshadows the establishment of a new centre for culture and education in the city. In the Old Town Hall, dating to the Renaissance era, a multimedia exhibition of 20th-century history will tell stories recorded by the documentarists of the Memory of Nations. The topic of the third debate is the so-called Brno Death March – the forced expulsion of the city’s German-speaking population – and the annual Reconciliation March, which commemorates this post-war tragedy. This year the Reconciliation March will be held for the 15th time, on Saturday 31 July. Helena Mezlová, a witness to the “wild expulsion” from Brno, will take part in the debate. Other guests include Jaroslav Ostrčilík, the founder of the Reconciliation March, and Blanka Návratová, the programmer of the Meeting Brno festival, of which the Reconciliation March forms a part. Moderated by Jan Hanák.

As part of the debate there will be the first public screening of two short documentary films from the series Stories of the Reconciliation March, the fruit of last year’s collaboration between Meeting Brno, the Memory of Nations, South Moravia branch and the Austrian Institut für Geschichte des ländlichen Raumes, supported by the Interreg programme. Directed by Roman Zmrzlý, the series documents the fates of five people and follows the lives of the German-speaking people of South Moravia, their co-existence before World War II and their forced expulsion at its end. Some of them returned, others never saw their native land again.

Helena Mezlová
Aged six, with her mother, sister and two brothers, Helena was among the many forced on to the Brno Death March; she walked all the way to Pohořelice. From there, they managed to get to Vienna, and secretly returned to Brno. What they did not know was that not only their family would remain divided by the Iron Curtain, but that they would be persecuted by the Communist regime because of their German extraction.

Gertrude Schreckeneder
Gertrude was born in 1938 and her father was conscripted during the war. They lived in a villa in Kounicova street, from where they ran a taxi service and road haulage business and rented out garages. After the war they had to leave and abandon everything. Their journey took them to a camp in Poysdorf. Expelled from Czechoslovakia as Germans, they were not welcomed in Austria as Czechs. Gertrude’s mother gave her some valuable advice: forgive and forget. Today Gertrude enjoys her life with a wonderful husband and family near Vienna.

In collaboration with the Memory of Nations, South Moravia branch.

Programme will be held in czech only.
Free entry. Limited capacity. We suggest booking your place below on this site.