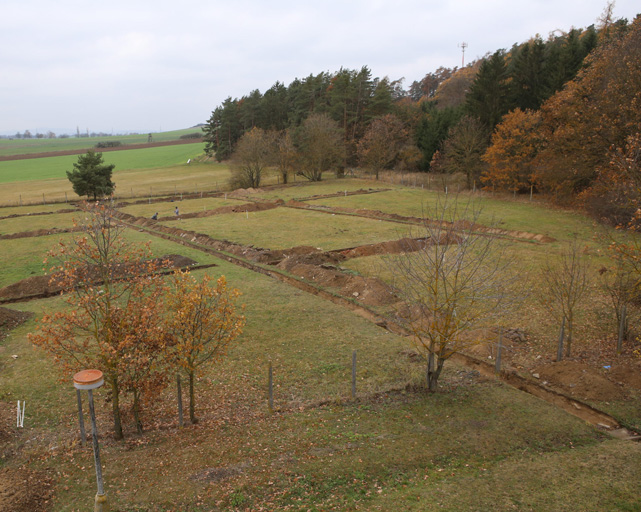 Pavel Vařeka’s lecture introduces the outcomes of the survey of the so-called “Gypsy camp” in Lety, presented in the context of the European studies of the material evidence of the Holocaust using archaeological methods. Fieldwork conducted in 2016-2019 located the camp precisely and showed that its remains are well preserved and must have been conspicuous on the surface until the construction of an industrial pig farm in the 1970s. Geophysical research and subsequent probes uncovered the near-complete plan of the camp, with preserved relics of the courtyard, prison barracks, part of the fencing and the foundations of the administrative building. In the eastern part of the site, the foundations of buildings serving as facilities for running the camp were uncovered (washrooms/laundry, stables and a disinfection station). Exceptionally well-preserved findings were uncovered in the cesspit, where items of organic origin were conserved thanks to specific soil conditions. The archaeological survey has provided material evidence about the living conditions in the camp, including personal items owned by the inmates; documented the ways in which the camp was liquidated; and provided evidence of the site’s subsequent use during the post-war period (e.g. as an assembly point for German prisoners in May 1945). Close to the present memorial, small-scale probes uncovered a so-called “temporary camp cemetery”, the exact location of which was previously unknown, and two graves of the camp’s victims were uncovered. The results of the survey have been used as data for the planned alterations to the pig farm site and the proposed new memorial, and will also support the proposal to declare the site of the camp a cultural monument.

In collaboration with the Museum of Romani Culture.